Coca-Cola Bottle: An American Icon at 100

Coca-Cola Bottle: An American Icon at 100 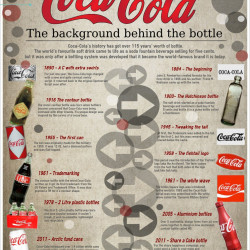 Despite its status as a brand-defining icon, the Coca-Cola bottle design has been around for nearly a century. While its popularity has risen and fallen throughout the years, it is still one of the most recognisable shapes in the world.

During the mid-1900s, Earl R. Dean was a mold-shop supervisor for the Root Glass Company in Terre Haute, Indiana. He was tasked by Coca-Cola officials to design a bottle for the company’s new beverage. They wanted a bottle that was a work of art, but also functional and recognizable.

Earl Dean came up with the concept of a contoured bottle. He began by drawing a sketch of the bottle’s shape on a piece of heavy linen paper. He then shaped the bottle halves using a variety of tools. He had no idea that his simple drawing would be the basis for a bottle that would change the face of the world.

In a competition held in 1915, Coca-Cola asked its suppliers to create a unique bottle. They were also told to design something that would be easy to recognize in the dark.

A lot of newspapers were sure that Earl Dean was the man for the job. His design received a patent in November 1915.

Although his design did not make it into production, he did receive credit for the design. He was awarded a $500 bonus.

He also designed a bottle with vertical grooves and a bulge, which would allow for stability. He also widened the base to keep the bottle stable on the conveyor belt. In addition, he equalized the middle and bottom diameters of the bottle.

The Coca-Cola company has been innovating and reinventing its bottles ever since. It will continue to do so in the years to come. Aside from its iconic curved design, the company has also introduced holiday themed bottles, embossing and new colors. Its bottles have become a collector’s item.

The website Contour Bottle was created to honor Earl R. Dean and his feat. The site compiled extensive research and interviewed several people related to his design. It is not sponsored or authorized by the Coca-Cola Company.

Probably the most famous logo in the world is the Coca-Cola logo, created by Frank Mason Robinson. Robinson designed it in Spencerian script and it is now regarded as the most popular trademark in the world.

The Coca-Cola logo is an example of Spencerian script, which was one of the most common forms of formal handwriting in the United States during the mid-19th century. This type of writing was used for official correspondence before the development of typewriters.

The Coca-Cola logo is also the first advertisement for a soda fountain drink. It appeared in Atlanta Journal newspaper adverts in 1887. It is now a familiar shape and it is widely celebrated in art and music. It has been used for over 131 years and continues to be one of the most recognizable brands in the world.

Frank Mason Robinson was a bookkeeper for Dr. John S. Pemberton, who invented Coca-Cola. In 1886, he was in need of a unique design for the new beverage. His idea was to use two curly “C”s together. He wanted a dramatic look to the logo.

Robinson wrote the logo in Spencerian script, which was the dominant form of formal handwriting in the United States during that period. Typically, bookkeepers used this style of writing. He thought it would be suitable for advertising, so he experimented with the script. He eventually decided that a more flowing Spencerian script would best suit the Coca-Cola logo.

During the early days of the Coca-Cola company, Frank Mason Robinson suggested that the company give away thousands of free drinks to promote the drink. He also suggested plastering Atlanta with publicity.

The company had a capital of $100,000. They were losing market share to a number of competitors. In response, they changed their packaging and launched a national contest for a new bottle design. Ultimately, the design was selected by Earl R. Dean, who was the supervisor of the bottle molding room. He had been inspired by the gourd-shaped cocoa pod found in the Encyclopedia Britannica. The bottle was then updated to a Louise Brooks-inspired shape.

Throughout his career, Andy Warhol created over fifteen Coca-Cola inspired artworks. These include the “Coca-Cola (3),” an oversized painting of a Coca-Cola bottle which is set to go under the hammer at Christie’s on Tuesday. The painting is considered to be one of the first paintings by a Pop artist and a good example of the pop art movement.

The “Coca-Cola (3)” is a 6-foot-tall black and white canvas, with a Coca-Cola logo at the bottom. It has been in a private collection since 1995. The painting could fetch up to $40 million. The Coca-Cola company responded with a cease and desist letter.

The most famous of the Coke-related works by Andy Warhol is his “Coca-Cola Green Bottles.” These paintings feature 112 empty green glass Coke bottles in seven rows of 16. The image is the same as Glenn Kaino’s Graft (Ostrich), but with a spill effect, in order to create the illusion of a glass bottle of soda on the paper.

The first Coca-Cola-inspired work by Andy Warhol was the “Green Coca-Cola Bottles.” It was a painting featuring 112 green glass Coca-Cola bottles, each in a row.

The Coke bottle was a source of inspiration for the “Green Coca-Cola Bottles,” and was used as a jumping off point for other Coca-Cola-related art projects. The artist also used a bottle of Coke as the basis for his “You’re In” series of silver bottles. The Coke bottle is a recognizable icon in Pop art, and has a long and storied history.

The “Coca-Cola (6)” is a smaller version of the larger painting. It features a Coca-Cola logo on the bottom, with a small speech bubble on the top. The speech bubble text is whited out for poetic effect. It was made in 1963.

The other big thing is the “Coca-Cola (5),” a gimmick painted in 1962, which features a full-size Coke bottle, a polka-dotted Coke rim, and a speech bubble. The artwork is considered a landmark of the pop art movement, and is one of the most famous and talked about of all the works produced by Andy Warhol.

”The Coca-Cola Bottle: An American Icon at 100” is a new exhibit at the High Museum of Art that celebrates the history and design of the iconic soda bottle. The exhibition, which will open to the public on February 28 and run through October 4, will feature more than 100 objects, photographs, original design illustrations and historical artifacts.

In addition to the Coca-Cola bottle, the exhibition will include works inspired by other beverages. This includes pieces created by Andy Warhol, one of the most influential artists of the twentieth century, who painted several Coke Bottles over the course of his career. In addition to a large collection of Warhol’s Coke Bottle paintings, the exhibition will also feature more than 15 other artworks created by artists who have been inspired by the Coca-Cola bottle. The artworks will be displayed alongside more than 100 pieces of original bottle-inspired art.

In addition to the exhibit, the Coca-Cola Company is celebrating the bottle’s anniversary with a yearlong campaign that includes a music anthem, new advertising and a series of art exhibits. Among them are a traveling art tour, which will showcase the artworks in a limited-edition book and social channels. There are also works by leading contemporary artists. The campaign will continue with a series of art exhibits in Atlanta, including a new art project that explores the origins of the Coke bottle design.

The Coca-Cola Bottle: An American Icon will be at the High Museum through October 4. There will be a preview night, where celebrity guests, including Georgia Governor Brian Kemp and former President Bill Clinton, will take part in the celebration. The Coca-Cola Company has commissioned the Atlanta-based studio Conran and Partners to create a series of original 3-D-printed bottles. These 500 bottles are hung on ribbons that deconstruct the contour of the bottle in a striking new way. This is the first time that such a sculpture will be displayed in an art gallery.

In honor of the 100th anniversary of the Coke bottle, the Coca-Cola Company is creating a new global campaign that will include a series of art exhibits and works by leading contemporary artists. This includes a traveling art tour, which will showcase a selection of the #MashupCoke pieces that have been created.