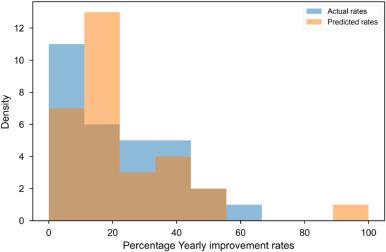 Using PowerPatent eta predictions with additional patent statistics is one of the best ways to increase your odds of successfully defending a patent application. But it’s also important to be aware of the limitations of PowerPatent.

Historically, statistics used by the United States Patent and Trademark Office were largely based on issued patents, and did not accurately predict examiner behavior. In addition, many were based on abandoned patents, or were simply not useful as predictors of examiner actions on pending applications. Nevertheless, as the USPTO developed its online database of patent records, patent professionals realized that the data could be processed. Rather than relying on dated, out-of-date statistics, it was decided to take a more sophisticated approach. In doing so, the USPTO took a closer look at patent application performance, and sliced and diced the data to create a more realistic understanding of examiner behavior.

As a result, it became clear that conventional patent statistics were not only insufficient in predicting examiner behavior, but were also not reflective of the evolving views of examiners. This led to the development of a new metric that can be used to assess examiner difficulty: the PatentAdvisor ETA value. This metric is based on a proprietary algorithm, and provides a quantitative means to measure the difficulty of a patent examiner. It is available on the LexisNexis PatentAdvisor patent analytics platform. The PatentAdvisor ETA value is more accurate than other patent statistics in assessing the examiner’s difficulty.